Ask a geek how to fix a problem you’ve having with your Windows computer and they’ll likely ask “Have you tried rebooting it?” This seems like a flippant response, but rebooting a computer can actually solve many problems.

So what’s going on here? Why does resetting a device or restarting a program fix so many problems? And why don’t geeks try to identify and fix problems rather than use the blunt hammer of “reset it”?

This Isn’t Just About Windows

Bear in mind that this soltion isn’t just limited to Windows computers, but applies to all types of computing devices. You’ll find the advice “try resetting it” applied to wireless routers, iPads, Android phones, and more. This same advice even applies to software — is Firefox acting slow and consuming a lot of memory? Try closing it and reopening it!

Some Problems Require a Restart

RELATED: How to Export Photos from Any Computer to an iPhone or iPad

Windows has gotten better at dealing with errors — for example, if your graphics driver crashes, Windows XP would have frozen. In Windows Vista and newer versions of Windows, the Windows desktop will lose its fancy graphical effects for a few moments before regaining them. Behind the scenes, Windows is restarting the malfunctioning graphics driver.

But why doesn’t Windows simply fix the problem rather than restarting the driver or the computer itself?  Well, because it can’t — the code has encountered a problem and stopped working completely, so there’s no way for it to continue. By restarting, the code can start from square one and hopefully it won’t encounter the same problem again.

While certain problems require a complete restart because the operating system or a hardware driver has stopped working, not every problem does. Some problems may be fixable without a restart, though a restart may be the easiest option.

RELATED: Are 4K Monitors Worth It for General Computer Use?

In all cases, a restart wipes away the current state of the software . Any code that’s stuck in a misbehaving state will be swept away, too. When you restart, the computer or device will bring the system up from scratch, restarting all the software from square one so it will work just as well as it was working before.

In the mobile device world, there are two types of “resets” you can perform. A “soft reset” is simply restarting a device normally — turning it off and then on again. A “hard reset” is resetting its software state back to its factory default state.

When you think about it, both types of resets fix problems for a similar reason. For example, let’s say your Windows computer refuses to boot or becomes completely infected with malware. Simply restarting the computer won’t fix the problem, as the problem is with the files on the computer’s hard drive — it has corrupted files or malware that loads at startup on its hard drive. However, reinstalling Windows (performing a “Refresh or Reset your PC” operation in Windows 8 terms) will wipe away everything on the computer’s hard drive, restoring it to its formerly clean state.

This is simpler than looking through the computer’s hard drive, trying to identify the exact reason for the problems or trying to ensure you’ve obliterated every last trace of malware. It’s much faster to simply start over from a known-good, clean state instead of trying to locate every possible problem and fix it. 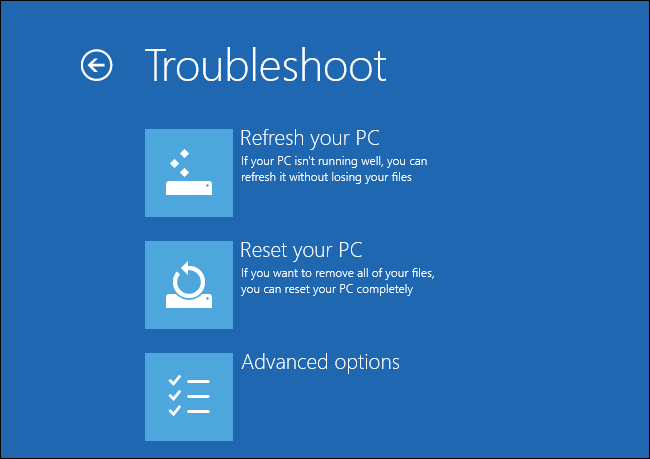 Ultimately, the answer is that “resetting a computer wipes away the current state of the software, including any problems that have developed, and allows it to start over from square one.” It’s easier and faster to start from a clean state than identify and fix any problems that may be occurring — in fact, in some cases, it may be impossible to fix problems without beginning from that clean state.