How to Quickly Show Your Desktop on Windows 10

How to Quickly Show Your Desktop on Windows 10

Sometimes, you need to quickly see your Desktop in Windows 10, but you don’t want to tediously minimize every open app window or move them and lose their layout. Luckily, several ways to allow you to quickly see the Desktop, then pick up where you left off. Here’s how.

How to Show the Desktop Using the Taskbar Button 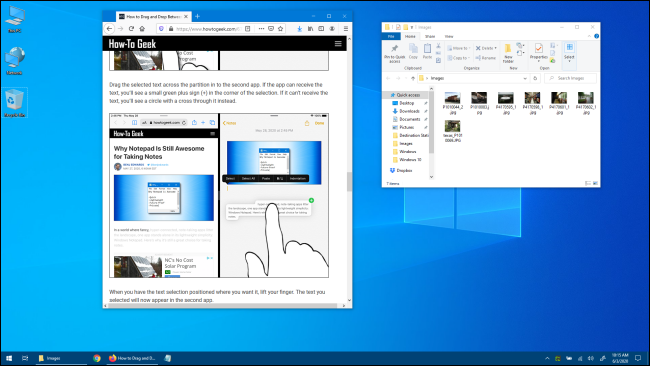 If you’d like to see an item on your Desktop quickly without disturbing your window layout, click on the tiny area to the right of the small vertical line on the far-right side of the taskbar.

That’s right—this tiny slice of the taskbar is actually a “Show Desktop” button. Once you click it, your application windows will temporarily disappear, and you will see the Desktop.

This taskbar button works like a toggle switch. If you click it again, your Windows will pop right back up where they were before.

Very handy. If you don’t like using this tiny button, it’s possible to craft your own “Show Desktop” shortcut that you can place on the Quick Launch toolbar or pin it to the taskbar itself. You can also show the Desktop using a few other methods that we’ll cover next.

How to Peek at the Desktop Using the Taskbar

Windows 10 includes a second way of looking at the desktop quickly called Aero Peek. To use it, first find the tiny “Show Desktop” button on the far-right side of the taskbar. It looks like this:

Right-click on the “Show Desktop” button and a tiny menu will pop up.

This menu has two options. The first, “Show desktop,” is an action. If you click on it, you will see the Desktop just as if you had left-clicked on the button. The second option, named “Peek At Desktop,” is a toggle setting. If you click it, a checkmark will appear to its left.

After that, if you hover your mouse cursor over the “Show Desktop” button, you will see a quick peek at the Desktop with approximations of the current application windows showing as translucent outlines.

When you move your mouse away, your application windows will appear again. Once the novelty fades and you’d like to turn Aero Peek off, right-click on the “Show Desktop” button again and uncheck the “Peek At The Desktop” option.

RELATED: How to Directly Link to Text on a Web Page in Chrome

How to Show the Desktop By Right-Clicking the Taskbar

You can also show the Desktop quickly by right-clicking on the taskbar. When a menu pops up, select “Show The Desktop.” 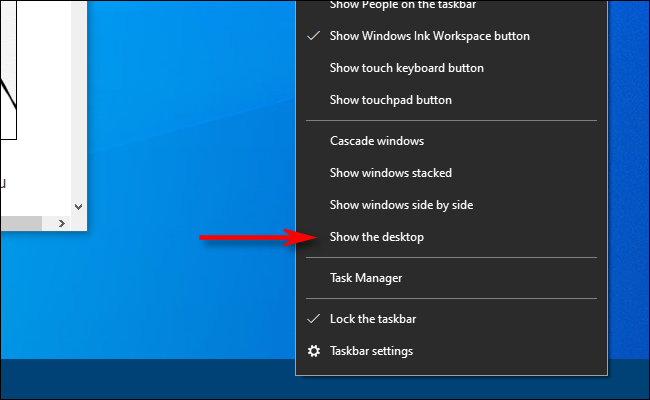 As with the methods above, all of your application windows will be temporarily hidden. To bring them back, right-click on the taskbar again. This time, select “Show Open Windows,” and they will return just as they were before. 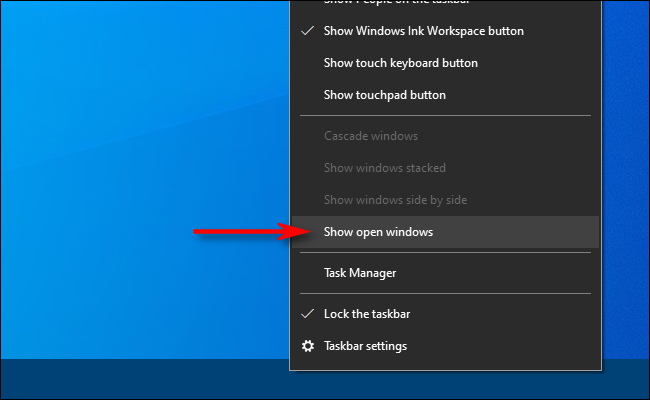 How to Show the Desktop Using a Keyboard Shortcut

Further Adventures in Showing the Desktop

If you have a mouse or pointing device with extra buttons, it’s usually possible to assign the “Show Desktop” function to a button. For example, you could configure the middle scroll wheel button this way, and when you’d like to quickly see your desktop, just click the button. Configurations vary, depending on the mouse utility software (or drivers) you are using. Whichever way you set it up, you’ll probably feel like you are using Windows 10 more efficiently. Have fun!