The iPad is rarely thought of as a proper computer, but times are changing. Apple’s hardware, software, and marketing suggest the latest iPad Pro and its Magic Keyboard are the closest laptop replacement Apple has ever made.

Despite many similarities, the iPad Pro, iPad Air, and standard iPad are quite different tablets. If you want to replace a full-fledged computer with a tablet, the iPad Pro comes much closer in terms of features and hardware capability.

Starting at $799, the iPad Pro is also a lot more expensive than a regular iPad, which starts at $329. You can get an iPad Air starting at $499. For this comparison, we consider the iPad Air to be the “standard” model because the regular iPad is cheaper and aimed largely at classrooms.

The latest iPad Pro models are compatible with Apple’s newly announced Magic Keyboard (which includes a trackpad). The iPad Air has to make do with a Smart Keyboard (a folio case that lacks a trackpad). If you want to use the (latest) second revision of the Apple Pencil, you’re limited to the iPad Pro. Optionally, you can connect a Bluetooth mouse or trackpad to your regular iPad.

Overall, the iPad Pro experience is the more premium of the two. Both Pro tablets ship with high-resolution, 120 Hz ProMotion displays, which means they’re more responsive to touch input. Display quality is also better on the Pro, thanks to Apple’s Liquid Retina display. The speakers have notably improved, as well.

If you’re looking to perform demanding tasks on your tablet, like rendering video or playing the latest 3D games, the iPad Pro is the better choice. If you want expandability via USB-C, go for the Pro. If a trackpad is important to you, you’ll need the Pro.

Both tablets run the same operating system and offer access to a largely identical library of software. However, the iPad Pro comes much closer to a laptop replacement, while remaining competitive on price.

The iPad Pro Is More Like a Mac Than Ever Before

Apple’s marketing for the latest iteration of the iPad Pro marks a turning point in how the company is positioning its high-end tablet. The claim that “your next computer is not a computer” is the first time Apple has referred to the iPad as a “computer” (despite the implications of such a slogan).

While connected to the Magic Keyboard, the iPad itself floats, not unlike an iMac with a pivoting hinge. It’s a big improvement over the flimsier Smart Keyboard, while still being thin and light enough to pass as a tablet.

The iPad Pro also ships with a proper USB-C port for charging and expansion, as opposed to the Lightning port on the Air and regular iPad. You can connect USB-C hubs to use regular USB-A, memory cards, a 3.5mm audio interface, or HDMI connections, with varying success.

And then, there’s iPadOS, an offshoot of iOS. It looks and feels the same, but has been tailored more specifically to the tablet form factor. The gestures you use on the iPad Pro are similar to those on the latest iPhones. You can also run two apps simultaneously in a 50/50 Split View, or a 70/30 Slide Overview.

You can manage files both locally and in the cloud thanks to Apple’s Files app. Believe it or not, none of the iPad or iPhone models had this feature until iOS 11 arrived in late 2018. You can tag files with colors and labels to make organizing things easier, just as you would on macOS. These are basic, yet essential, features and the iPad Pro finally has most of them covered.

Another area in which the iPad Pro has improved is software support. While iPadOS borrows heavily from the standard iOS release, the arrival of heavyweight apps makes the tablet infinitely more viable for creative professionals. Adobe Photoshop for iPadOS even shares the same code base as the desktop version.

Adobe has also announced that full-fat versions of Illustrator and Aero will be coming to the iPad soon. This sort of software support from an industry leader is a game-changer. Combine this with professional-grade apps, like LumaFusion or Cubasis, and the iPad Pro becomes a far more viable platform for serious work.

What Do You Use Your Mac for?

The iPad Pro (and even the regular old iPad) can do pretty much any “wireless web” task you throw at it. This includes checking and replying to emails, chatting on Slack, browsing the web, word processing, and other office tasks. For most people, it’s a pretty capable photo and video-editing machine, too.

But there are many tasks the iPad Pro and its cheaper siblings can’t accomplish. This is largely due to Apple’s “walled garden” approach to software management. iPadOS isn’t macOS. Although the two platforms share more code and features as time goes on, they’ll remain distinctly separate.

macOS is a proper desktop operating system. Apple does its best to wrap the desktop experience up in cotton wool, making it more difficult to install software from unknown sources.

Mac features, like System Integrity Protection, prevent people (and malware) from damaging important files or injecting code into apps, like Finder or Safari.

These safeguards are largely optional on macOS. If you’re comfortable doing so, you can install an app from anywhere. You can disable OS-level protections and fiddle with files to your heart’s content. You can install Windows on your Mac and delete your recovery partition if you really want to.

You can’t do any of that on an iPad without a jailbreak (installing modified firmware that removes Apple’s restrictions). It’s a fundamentally risky process because you also remove many of Apple’s protections. Jailbreaking is a cat-and-mouse game, and it’s one security-minded folk should avoid.

Your iPad can’t format a USB drive to exFAT so you can view a movie file on your smart TV. Your iPad can’t run Windows or Linux or prepare installation media for those platforms. Many accessories are incompatible with iPad, including Thunderbolt RAID arrays and HDMI capture cards.

You can’t install a BitTorrent client on your iPad and use it to share files. You can’t easily play old DOS games using an emulator like DOSBox. You can’t run a simple file or media server for your home network from an iPad. You also can’t make local backups of your iPhone or other iOS devices on an iPad like you can a Mac.

If you make software, there is no Xcode for iPadOS (not yet, anyway). There are rumblings Apple will release a version of Xcode for the iPad along with iOS (or iPadOS) 14. This would be a game-changer for many developers tied to MacBooks and iMacs. It could also open the door for Apple’s top-tier apps to receive iPadOS ports, including industry standards, like Final Cut Pro and Logic Pro.

The iPad is, by design, a more limiting device. However, that doesn’t mean it won’t work as a computer replacement of sorts. In fact, it may make more sense to buy an iPad Pro than to upgrade your existing machine.

The Benefits of Using an iPad for Certain Tasks

If you’re looking for a faster, newer, shinier way of accomplishing basic daily tasks, an iPad Pro could pick up the slack. Instead of opting for a new MacBook, consider keeping your old one and supplementing it with an iPad Pro.

Starting at $799, the iPad Pro is cheaper than any MacBook model. Add $299 for a Magic Keyboard, and you’re looking at $1,099 for a basic 128 GB tablet. By comparison, the MacBook Air starts at $999 and requires no additional purchases. 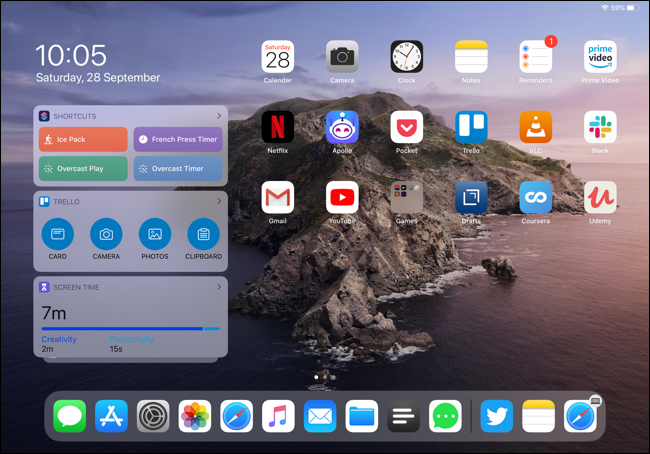 If you hold on to your Mac for anything the iPad Pro can’t do, the tablet could complete a nice setup. You’ll also be gaining a tablet that’s perfect for watching movies and playing games, and a better sofa or travel companion than a hinged laptop.

Battery life is comparable, as is charging, as both the iPad Pro and MacBook Air charge over USB-C. When comparing the 11-inch models, both are slim and portable. If you can live with limitations (or work around them), you might prefer to go to the iPad Pro route.

Just remember the iPad can’t do everything. You’ll likely run into some of these limitations at some point. Even things you might take for granted, like using web apps (blog engine WordPress is a great example), can be frustrating on an iPad. Hopefully, though, the new Magic Keyboard trackpad and iOS 14 will help resolve some of these issues.

Progress, But Still Not Right for Everyone

When the iPad Pro first launched, it wasn’t capable of fully replacing a laptop. Over the last few iterations, though, Apple has made some big changes on both the hard- and software fronts. These changes are giving the premium tablet a real shot at success.

Finally, years later, a strategy is coming together!

RELATED: How to Reset Your Roku’s Network Connection

apple, apple tv, best iptv, Can You Replace Your Mac with an iPad in 2020?, ipad, iptv, iptv forum, iptv provider, MAC, MainIPTV
Share:
Previous post What is Roku Express?
Next post How to Automatically Translate a Web Page in Microsoft Edge