The Best Photo Editors for Chromebooks

The Best Photo Editors for Chromebooks

The Best Photo Editors for Chromebooks: One of the biggest question we see about Chromebooks is “can they run Photoshop?” The answer to that is no—at least not the full version you’ll find on other platforms. But that doesn’t mean they can’t do photo editing.

And that’s really the key here: knowing when you need Photoshop versus when you just need something to edit photos. There are some powerful tools available for Chromebooks—perhaps not quite as powerful as Photoshop, but they can get pretty dang close for most uses.

The nice thing about photo editing is that it doesn’t require an insane amount of horsepower on the computer side—it’s pretty easy to run in a web browser and let the server handle most of the heavy lifting. As a result, the best photo editor for your Chromebook is a web tool: Pixlr Editor.

This is about as close to a full Photoshop replacement as you’ll find on the majority of Chromebooks out there, with Pixlr covering most of what the bulk of people will do in Photoshop anyway. The free version of Pixlr can handle things like layers, simple color tweaks, and more, while the Pro version—which will set you back $5 a month—can open PSD (Photoshop) files, removes ads, and a lot more.

If you just need to occasionally edit photos, the free version will probably get you through just fine. But if you find yourself spending more time in Pixlr than not, the Pro version is probably the way to go.

There’s only one caveat here: Pixlr requires Flash, which can be…buggy. You may never have any issues, but it’s still something to keep in mind. Pixlr is also available for Android, though it’s really only similar in name. The mobile app is quite different than what you get in the browser.

The Best for Retouching and Filters: Polarr (Web, Free/Pro) 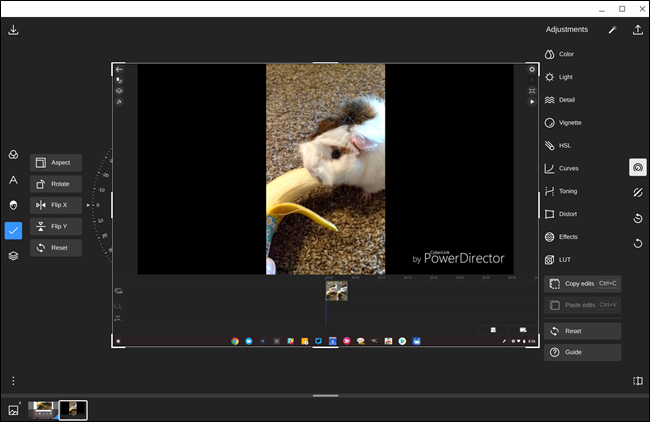 If you’re more into retouching photos, cool filters, and the like, then Pixlr will probably leave you wanting. But that’s where Polarr comes in—it’s great at these kinds of tweaks. The interface is different than what you may have come to expect from a photo editor, which is one of the things that makes it really good—it’s very intuitive and easy to use.

You can use Polarr for free, but there’s also a Pro version that adds a variety of tools to the editor—like better masking tools, more powerful retouching, text, and premium filters. While once upon a time, Polarr offered the Pro version for a one-time flat fee, it now costs $23.99 a year or $2.49 a month. Still, it’s an exceptionally well made app, so it’s worth it.

It’s also available for Windows, iOS, and Android, making it a very versatile solution, too. 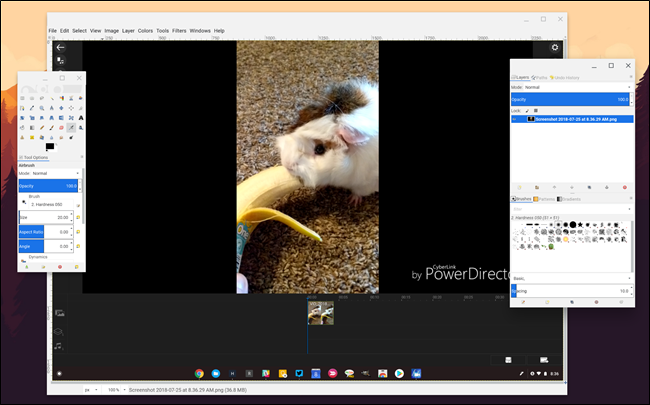 If you’re lucky enough to have a Chromebook with support for Linux apps (which is a short list right now but might change by the end of 2018), then you have a whole different world available to you. If you’re looking for the closest thing you’ll find to a full Photoshop replacement without paying a dime for it, Gimp is where it’s at.

Gimp is about as full featured as a photo editor can be, all in a nice, tidy, open source package. It’s exceptionally powerful, especially compared to pretty much anything you’ll find on Chrome OS. If your Chromebook has support for Linux apps and you’d like to give Gimp a whirl, fire up the terminal and type sudo apt-get install gimp . That’s all there is to it. 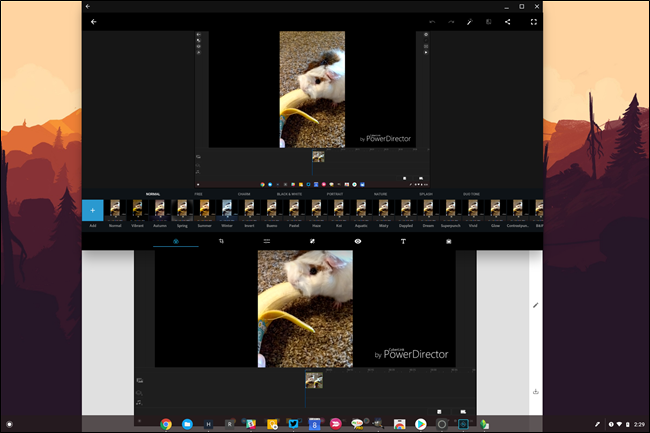 Just because they’re not the most powerful options on the market doesn’t mean there isn’t a place for simple editing tools on your Chromebook, and if you’re into hitting up the Play Store for your photo editing needs, Photoshop Express and Snapseed should fit the bill nicely.

Both apps are incredibly easy to use, touch friendly, and best of all, free. They’re both quite powerful, given the fact that they’re Android apps that are really designed around mobile use—there isn’t much you can’t do with them, especially on the lighter side of edits. And since they’re mobile apps, they’re both very lightweight and run fast.

You can get Photoshop Express here, and Snapseed here.