How Does 3D Printing Work?

How Does 3D Printing Work?

Picture a robot-controlled hot glue gun that uses plastic instead of glue, and you have the basics of a 3D printer. Strands of plastic are fed into a print head, which is heated up to melt the material. The print head moves around very precisely in three dimensions and drops lines of plastic onto the print bed—the table on which it prints. The printer does this over and over, building up layers of plastic until it forms a 3D part.

It All Starts with 3D Models

Every object printed on a 3D printer starts with a 3D model. These are usually made in a CAD program designed for working on real-world 3D models, like TinkerCAD, Fusion360, or Sketchup. This is a bit different from how 3D models might be made for movies or games, though you could certainly print out very detailed figures from traditional 3D modeling software.

RELATED: What Is Xbox Smart Delivery, and How Does It Work?

One benefit of a 3D printer is that it can print nearly anything. Some models are so complex that they’re impossible to make with traditional manufacturing techniques like molding or CNC routing, and that’s where 3D printers take an obvious lead. However, they’re not just used for making fancy geometric shapes, as it’s usually much cheaper for a large factory’s R&D department to print a single model in plastic rather than rigging up the whole factory to make the actual part. This is called prototyping, making a rough draft to help test the final copy without wasting valuable time and materials.

Slicing the Model for the Print 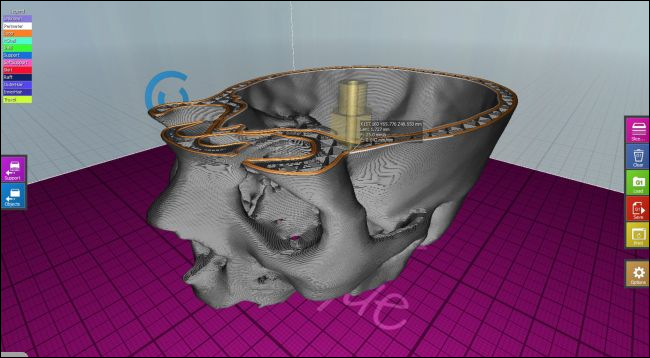 Since a printer doesn’t understand how to take a complex 3D mesh and turn it into a printed model, the 3D model must be decoded into information that the printer can understand. This process is called slicing since it takes scans of each layer of the model and tells the printer how it should move the print head to create each layer in turn. It’s done with the aid of a slicer, a program that handles all of this for you, like CraftWare or Astroprint.

The slicer will handle the “fill” of the model, creating a lattice structure inside a solid model to give it extra stability. This is one area where 3D printers shine—they can print very strong materials with really low densities, by strategically creating pockets of air inside the model and making it much lighter.

Another thing the slicer handles is support columns. Since the printer can’t lay down plastic on thin air, support columns must be created to allow the printer to bridge the gap. These are removable but are used in the printing process to ensure it doesn’t collapse.

Once the slicer is done, it will send the data over to the 3D printer to start the printing process.

Once the printer starts, you’ll notice the main problem with 3D printing today: it’s horrendously slow. While a 2D printer can print a whole book in a couple of minutes, most 3D prints will take several hours, if not days, to finish printing. And if you messed up the settings, misconfigured the slicer, or just bumped into it a bit, you could lose the whole print.

There are some faster technologies making splashes in the industry, like the Carbon M1, which uses lasers shot into a bed of liquid and pulls the print up out of it, speeding the process up significantly. But these kinds of printers are many times more complicated, much more expensive, and only work with plastic so far.

So Should I Buy a 3D Printer?

If you’re not interested in designing and printing parts, you certainly aren’t going to be replacing your boring 2D printer anytime soon.

The printers most consumers will buy usually print in plastic, though there are exotic (and expensive) printers used in the industry that can print pretty much anything. There’s even a 3D printer that can print artificial meat. The technology is moving very quickly and has significant implications across many industries. Surely someday, you’ll be able to print gourmet meals from an edible food printer, but until then it remains a hobbyist and industrial device.

Still, with prices coming down all the time, it can be a fun hobby—especially if you build anything where small plastic models are used.